What happens when viewers attack

As some of you might know NatGeo launched Doomsday Preppers a show about loonies preparing for the end of the world/or a show about smart people getting prepared for a bad event (it depends if the accident might happen tomorrow or actually did happen yesterday as to which is the prevailing view).

In season 1 it was 50% worth watching and people learning stuff but in season 2 you ended up getting rich people with more money than sense appearing.

One family in particular....were just plain awful (including not earthing their construction so blew the fuses in the first lighting storm).....drum roll please you know what happens here NatGeo staff decided to spin off a show called The Castle just about this one family (think blonde kardashians in the mountains).

Most preppers are taking bets that their "castle" will fall over or blow up before the end of the season. Basically what happens when your core audience knows more than you and think you are giving their passion a bad name........ step this way folks. 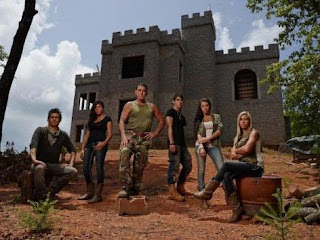